ELECTRICAL & PLUMBING
Emergencies WITHIN THE HOUR*

ELECTRICAL & PLUMBING
Emergencies WITHIN THE HOUR* 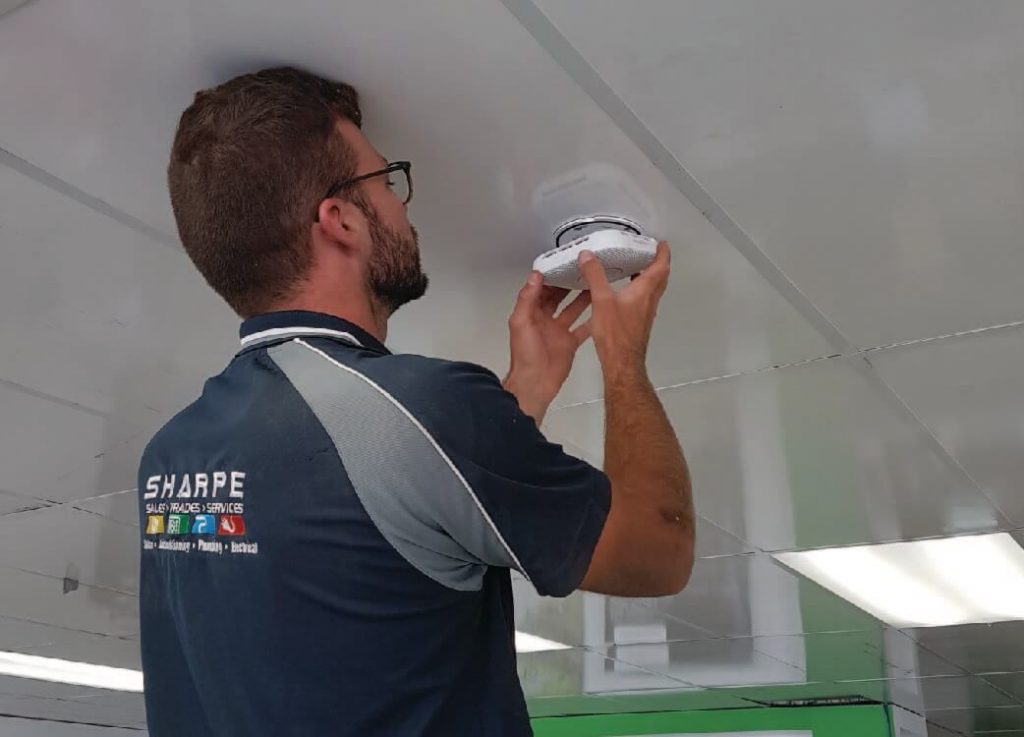 Smoke Alarm Installation: Smoke detectors will reduce the risk of fire in a house.  Therefore, it is essential that smoke detectors are installed properly and working effectively. It is also important to have working smoke alarm batteries available in your home for quick replacement. Sharpe Services offer specialist smoke alarm installation, fire alarm systems, testing, maintenance, and hardwired, interconnected upgrades to ensure everyone in your home has the quickest warning signal of fire.

ONLY WORKING ALARMS SAVE LIVES

Don’t put it off, book your smoke alarm testing today! 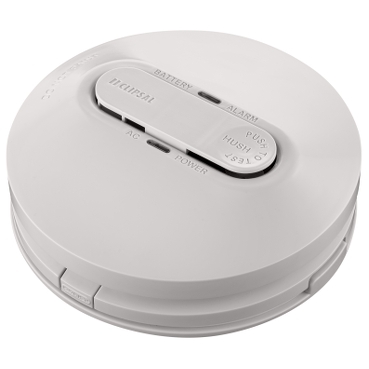 Photoelectric Smoke Alarms from Clipsal has been recognised as providing one of the best home detection of fires. Photoelectric smoke alarms contain no radioactive material which makes it easy to dispose of it in an environment friendly manner. Suitable for installing near kitchens, in areas of combustion heaters, or open fires. Clipsal smoke alarms will protect your valuable assets, family, friends, and home. Smoke alarms are essential safety devices to have on your home as it is designed to give you early warnings of a fire allowing residents to escape on time and safely.
LEARN MORE 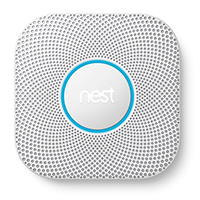 Nest Protect has revolutionised smoke and CO alarms as it will alert you and your family from fast burning fires, smouldering fires, and carbon monoxide. It takes less than 5 minutes for a fire to take over a room as today’s furniture makes fires burn at a faster rate. You can be assured that Nest Protect will warn you of unexpected fire breakouts by informing you if there is a problem through the smoke alarm, sending a silent warning on your mobile, and a message to your mobile and all the nominated mobile devices in case no one is at home.
LEARN MORE

As one of the few Gold Master Electricians in Adelaide, Sharpe Services is proud of its achievement by satisfying Master Electricians Gold Standards.  When you call on Sharpe Electrical, you can rest assured that you will be greeted by highly experienced, well trained and domestic electricians Adelaide. ‘Local Electricians Near Me’ needed? You’re sorted with us! 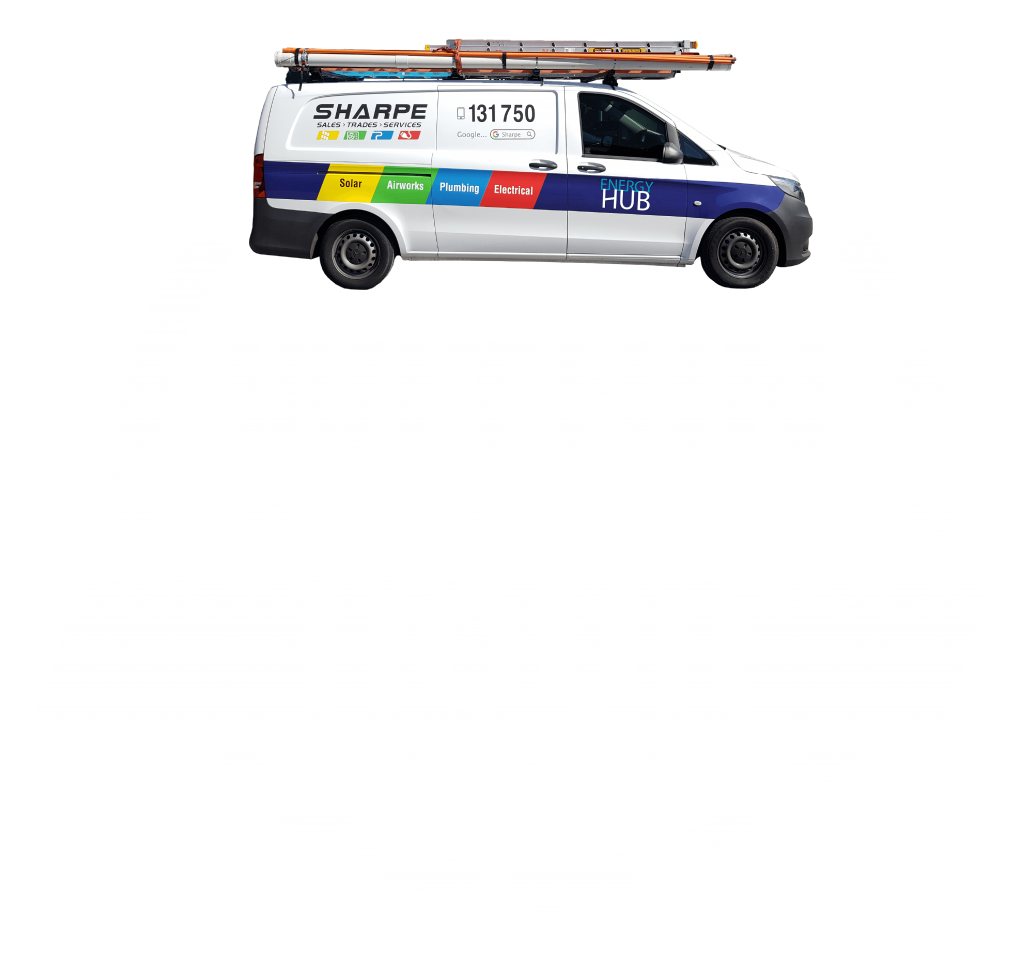 It may be time for you to get your smoke alarm replaced or upgraded if you are hearing beeps, a noise or the alarm is going off for no reason. It is extremely important to ensure the smoke detectors are working to keep you and your family safe. Keep your family safe by installing working smoke alarms in every room of the house (excluding the kitchen, laundry, and bathroom). Don't postpose smoke alarm installation!

Smoke alarms should be maintained at least every six months by following the manufacturer’s instructions to remove dust, lint, cobwebs, and insects. Testing your smoke alarm once a month is essential to ensure the efficiency and effectiveness of its operation. Undertaking maintenance of the smoke alarm is critical to ensure that it is working sufficiently.

As seen in ABC News

Why do smoke detector alarms go off even when there’s no smoke?

Most people don’t change the batteries in their smoke detectors often enough and that’s the most likely reason why they go off unexpectedly.

In most sensors you might think of, the strength of the signal goes up when they detect what they’re supposed to. But most smoke detectors are instead designed to go off when their electrical current goes down.

That’s because smoke in the air will reduce the current. If your battery is dying, the current that’s flowing through your sensor also goes down. And so you can get a false positive. Making you think it’s time for a new smoke alarm installation! But that’s not the case!

People often change the battery when they move into the house and then never touch it after that. The battery is supposed to be changed at least once every six months or once a year, but most of us don’t. Please get in touch with a certified electrician from Sharpe Services today! 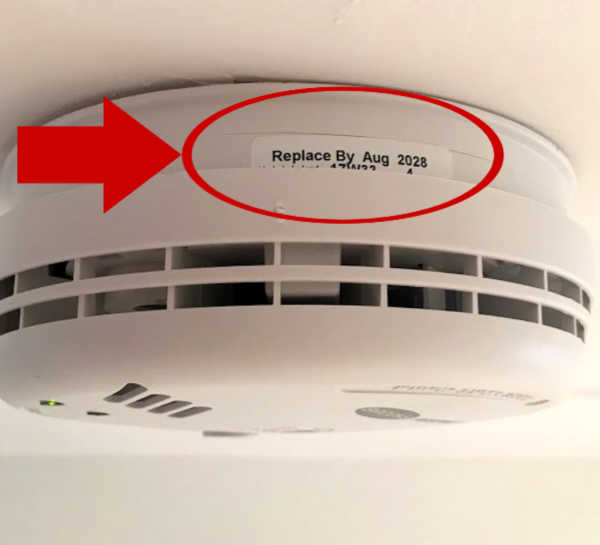 It's only when the smoke alarm goes off, you check it, you make sure you're not dead, and maybe then change it.

How should Smoke Alarms be Maintained?

Test your smoke alarm and back up batteries by:

Ensure the smoke alarm is cleaned by vacuuming it, spray insect repellent on a cloth.

The back-up battery needs to be replaced every year.

All smoke alarms have to be replaced every 10 years under normal operating conditions. The entire unit must be replaced with a brand new smoke alarm to ensure that your device will alarm you when needed. Sharpe Services will help you stay safe and meet Australian complaints by ensuring that your smoke alarm installation is done by a licensed certified electrician and it is a high-quality smoke alarm. 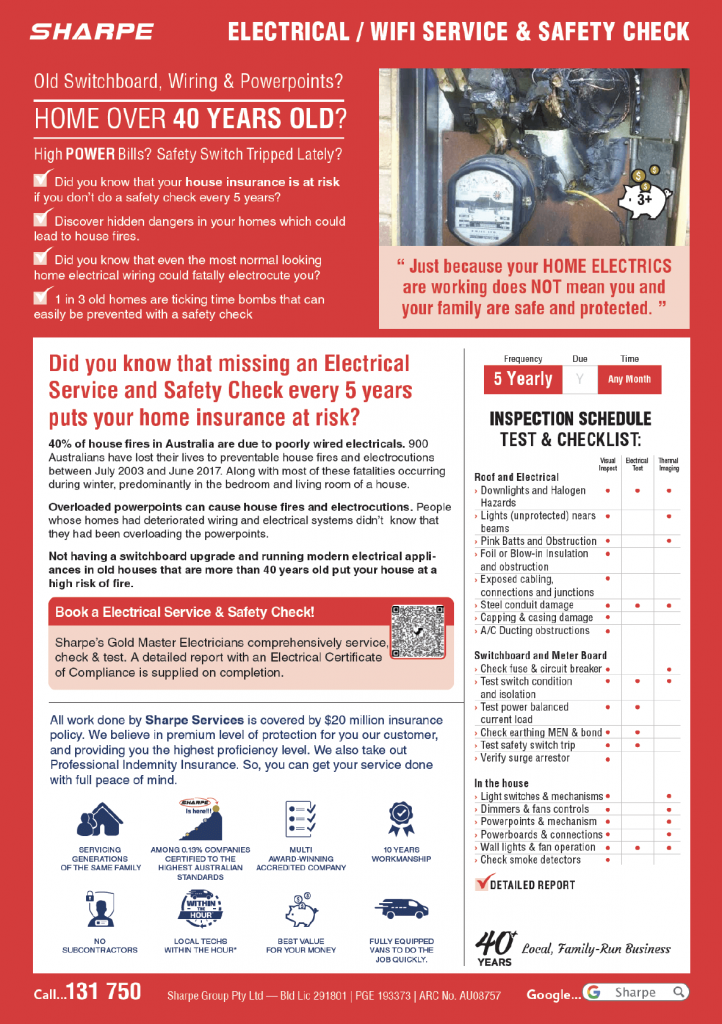 For only $165, we offer a total Electrical Safety Service maintenance and system checks package.

The service and inspection includes: 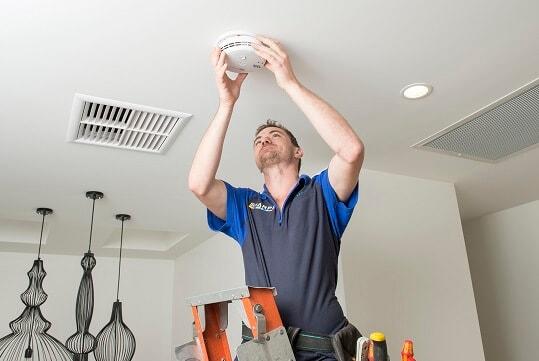 New Buildings – Building approval on or after 1 January 1995

Since 1 January 1995, smoke alarms have been required in all new homes in South Australia. These alarms must be hard wired to the 240 volt mains power supply unless the dwelling is not connected to such a supply. They should also be fitted with a back-up battery to provide power in case of a mains power supply failure. In dwellings not connected to mains power, smoke alarms powered by 10 year life, non-replaceable, non-removable, permanently connected batteries may be installed.

How many smoke alarms and where?

The Development Regulations require that one or more smoke alarms must be installed in every dwelling in locations that will provide reasonable warning to occupants of sleeping areas so that they may safely evacuate in the event of a fire.

For your safety and the safety of everyone in your home, hardwired smoke alarm installation must be done by a certified electrician.

You can trust Sharpe Services for reliable advice and services on all your electrical requirements. Our accredited Gold Master Electricians strive to be the best in what they do. Find a Electrical technician in Adelaide with Sharpe Services Today.

When last did you test your smoke alarm?

ONLY WORKING ALARMS SAVE LIVES

Don’t put it off, book your smoke alarm testing today!

You will always feel secure dealing with Sharpe

You are in the right hands because we care. We care a lot !

The highest level of accreditation in the industry to give you a premium quality service and peace of mind.

LOCAL TECHS WITHIN THE HOUR*

Sharpe Services technicians live and work throughout the Adelaide Metro area, which means you get an emergency plumber or emergency electrician with the hour

SERVICING GENERATIONS OF THE SAME FAMILY

Our service is so professional that our customers recommend Sharpe Services to their children, other family members, and friends

Whatever mess we make, we will always clean up after every job. We provide the highest quality of service and will always leave the scene of the issue cleaner than before we came

Delivering the highest standard and complete range of technical trades and services to South Australian homes.

We are locally owned and operated, proving more than 40 years of services in SA. This means convenience, security, and quality of service.

Send us an email

We are locally owned and operated, proving more than 40 years of services in SA. This means convenience, security, and quality of service.